In addition to these data-oriented problems, there typically are organizational issues that have to be considered:

This presentation focuses on

A fundamental Python stack for interactive data analytics and visualization should at least contain the following libraries tools:

It is best to use either the Python distribution Anaconda or the Web-based analytics environment Wakari. Both provide almost "complete" Python environments.

For example, pandas can, among others, help with the following data-related problems:

As a simple example let's generate a NumPy array with five sets of 1000 (pseudo-)random numbers each.

We then want to plot the (running) cumulative sum of each set.

Some fundamental statistics from our data sets.

Creating a Database to Work With¶

Currently, and in the foreseeable future as well, most corporate data is stored in SQL databases. We take this as a starting point and generate a SQL table with dummy data.

We create a table and populate the table with the dummy data.

We can now read the data into a NumPy array.

pandas is optimized both for convenience and performance when it comes to analytics and I/O operations.

The plotting of larger data sets often is a problem. This can easily be accomplished here by only plotting every 500th data row, for instance.

There are some reasons why you may want to write the DataFrame to disk:

pandas is tightly integrated with PyTables, a library that implements the HDF5 standard for Python. It makes data storage and I/O operations not only convenient but quite fast as well.

Now, we can read the data from the HDF5 file into another DataFrame object. Performance of such an operation generally is quite high.

pandas has powerful selection and querying mechanisms (I).

With pandas you can in one step read data from an Excel file and e.g. plot it.

Some final checks and data cleaning.

With the number of rows n and the data type dt, we can now generate the NumPy array.

We have 4GB of data; so far in-memory.

Storage in Table – No Compression¶

We first open a HDF5 database and use the PyTables library to this end.

We then write the NumPy array to a PyTables table object.

Writing speed is almost at the limit of the SSD drive, i.e. about 500 MB/s.

We now have the 4GB of data on disk.

Storage in Table – With Compression¶

Now use compression for the same IO operation.

Writing with compression takes only a bit longer.

However, in this particular case the 4GB data set is compressed to about 150MB only. This is a huge advantage, e.g. for backup routines.

The numexpr is specifically designed for the fast evaluation of numerical expressions.

For simplicity, we use another array with random data but with the same size and structure as in the previous example.

The task is to evaluate the following numerical expression:

To begin with, we set number of threads to 1 ("single threading").

numexpr has built-in multi-threading. Now set number of threads to 16 and evaluate the expression.

Multi-threading of course brings a lot for such problems.

For the out-of-memory evaluation of the numerical expression, we use again a HDF5 database via PyTables.

We write the array to a PyTables array object on disk.

For out-of-memory calculations, we also need a results array object on disk.

The out-of-memory evaluation of the numerical expression.

Check if we got the same results.

The use Nvidia GPUs, we need to have CUDA installed. An easy way to harness the power of Nvidia GPUs is the use of Continuum's NumbaPro library that dynamically compiles Python code for the GPU.

As the benchmark case, we define a function, using NumPy, which delivers a two dimensional array of standard normally distributed pseudo-random numbers.

Check if it works.

Now the function for the GPU.

A first comparison of the performance.

... but GPUs are made for higher workloads.

Now a more systematic routine to compare the performance.

The first test series with a medium workload.

The second test series with a pretty small workload.

The overhead of using the GPU is too large for small workloads.

For heavy workloads, the GPU clearly shows its advantages.

The algorithm we (arbitrarily) choose is the Monte Carlo estimator for a European option value in the Black-Scholes-Merton set-up. In this set-up the underlying follows the stochastic differential equation:

The Monte Carlo estimator for a call option value looks like follows:

A dynamic implementation of the BSM Monte Carlo valuation could look like follows.

The benchmark case of sequential valuation of \(n\) options.

The function for the parallel execution of a number \(n\) of different option valuations.

For a systematic performance comparison, we use the following funcion.

Let us compare performance of the two different approaches.

The simulation of the movement of N bodies in relation to each other, where \(N\) is a large number and a body can be a star/planet or a small particle, is an important problem in Physics.

The basic simulation algorithm involves a number of iterations ("nested loops") since one has to determine the force that every single body exerts on all the other bodies in the system to be simulated (e.g. the gravitational forces in place in a galaxy of billions of stars or the electro-magnetic forces in a system of atomic particles).

The simulation algorithm lends iteself pretty well for parallization. However, the example code that follows does not use any parallelization techniques. It illustrates rather what speed-ups are achievable by

A description and discussion of the algorithm is found in the recent article Vladimirov, Andrey and Vadim Karpusenko (2013): "Test-Driving Intel Xeon-Phi Coprocessors with a Basic N-Body Simulation." White Paper, Colfax International.

We first use pure Python to implement the algorithm. We start by generating random vectors of particle locations and a zero vector for the speed of each particle. All data is stored in lists of lists.

Next, we define the simulation function for the movements of each particle given their (gravitational/electro-magnetic) interaction. The algorithm uses a number normalizations and simplifications which seems acceptable against the background that we only want to compare different versions of the same algorithm. In other words, we do not have to really care, for example, about the quality of the results, we shall rather focus on the efficiency with which the results are generated.

We then execute the function to measure execution speed.

The basic algorithm allows for a number of vectorizations by using NumPy. However, we first need to generate our random sample data as a basis for the simulation. This time as NumPy array objects.

The respective NumPy simulation function is considerably more compact due to the vectorization.

It is also considerably faster.

Let us check how the bodies moved. The following is a snapshot of the final positions of all bodies.

For this case, we first implement a function which is somehow a hybrid function of the pure Python (loop-heavy) and the NumPy array class-based version.

This function is then compiled with Numba.

This new, compiled version of the hybrid function is yet faster.

The dynamically compiled version is by far the fastest.

We now use a larger set of bodies which we want to simulate. This illustrates that the Numba version of the algorithm is capable of shouldering quite a heavy workload.

Now the calculation with the Numba version.

The algorithmic example in this appendix shows which speed differences can be observed depending on different implementation approaches. Using Numba for dynamic compiling of Python functions might help in even improving significantly upon the speed of vectorized NumPy versions of the same algorithm. 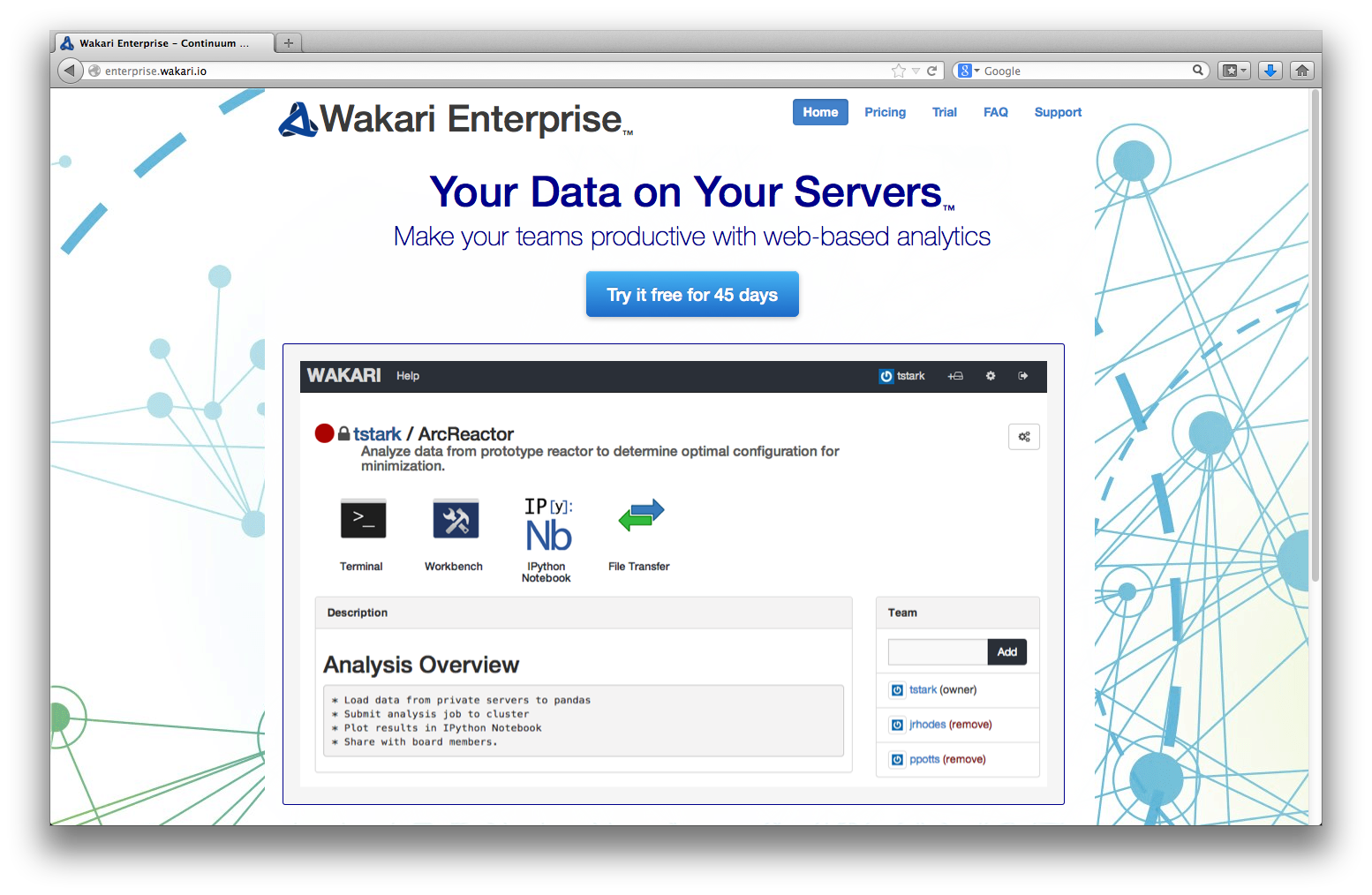 10 years ago, Python was considered exotic in the analytics space – at best. Languages/packages like R and Matlab dominated the scene. Today, Python has become a major force in data analytics & visualization due to a number of characteristics:

Read an Excerpt and Order the Book